I’m wondering… we hear about the magnitude of an earthquake, how’s that different from it’s intensity ?

Thanks for asking ! This is actually a crucial question to understand earthquakes… and it’s all about whether you speak of the earthquake or of its effects !

Earthquake magnitude and intensity are both important measurements obtained after an earthquake. They refer to two different aspects of the seismic event, the size and the damage, but they are often confused with one another.

The magnitude is a number indicating the size of the seismic event. An earthquake has only one value of magnitude. Such a value is obtained by analyzing seismic signals. The more seismic signals are analyzed, and the more time is spent on the analysis, the more accurate the resulting magnitude value will be.

I hop this helps

Why do we keep hearing in the media of the Richter scale for magnitude?
From the wikipedia page, it says it’s a local scale, unadapted and outdated, and that the moment magnitude (I guess it’s the one you’re referring to) if much better suited to compare earthquakes.

We often use Richter magnitude scale because it’s the most famous one…media often use that one. 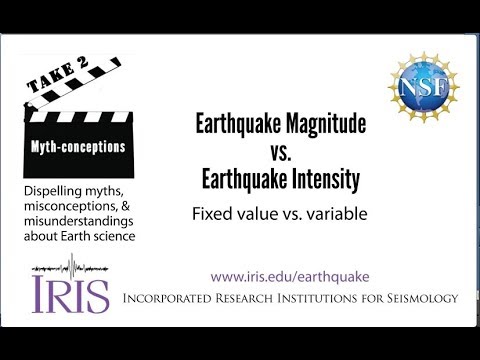 In addition yıu can check these links

The moment magnitude scale (MMS; denoted explicitly with Mw  or Mw, and generally implied with use of a single M for magnitude) is a measure of an earthquake's magnitude ("size" or strength) based on its seismic moment. It was defined in a 1979 paper by Thomas C. Hanks and Hiroo Kanamori. Similar to the local magnitude scale (ML ) defined by Charles Francis Richter in 1935, it uses a logarithmic scale; small earthquakes have approximately the same magnitudes on both scales. Moment magnitude (Mw ...

The Richter scale—also called the Richter magnitude scale, Richter's magnitude scale, and the Gutenberg–Richter scale—is a measure of the strength of earthquakes, developed by Charles Francis Richter and presented in his landmark 1935 paper, where he called it the "magnitude scale". This was later revised and renamed the local magnitude scale, denoted as ML or ML . Because of various shortcomings of the original ML  scale, most seismological authorities now use other similar scales, such as th... 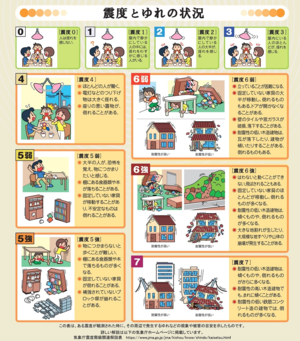 The Japan Meteorological Agency (JMA) Seismic Intensity Scale (known in Japan as the Shindo seismic scale) is a seismic intensity scale used in Japan to categorize the intensity of local ground shaking caused by earthquakes. The JMA intensity scale should not be confused or conflated with magnitude measurements like the moment magnitude (Mw) and the earlier Richter scales, which represent how much energy an earthquake releases. Much like the Mercalli scale, the JMA scheme quantifies how much g...

Essentially, most reporters know nothing on the subject, so simply look at the last earthquake story in their “morgue” (where old copies of their newspaper are archived), and duplicate that with the date changed. If a report in the 1930s reported a “Richter Scale” value, they’ll ask for that value and ignore a seismologist’s detailed explanation.
Charles (?) Richter started reporting readings from one specific model of seismograph which he deployed multiple of in California in the 1930s, and the “scale” was simply how many inches (mm?) the pendulum of that seismograph swung on first motion. For any other model of seismography, there is no such thing as a “Richter scale” value.
That is precisely the sort of correct answer that reporters are not going to put on the front page. For some reason, they think that most readers will be confused by it ; and besides, it wasn’t in the last “morgue” report.
I think that the choice of scale factor in the calculation of the moment magnitude was influenced by a desire to produce a scale which gave broadly comparable numbers to the Richter scale. It’s justifiable scientifically, but many other calculation methods would have been equally justifiable.
You know how nuclear weapon yields are normally given in “megatonnes of TNT”? But the actual energy yield is measured in Joules, (the SI unit of energy/ work) with a scale factor of 4.184 GJ to the “tonne of TNT”. IIRC, the largest explosion of TNT ever was about 300 tonnes (0.0003 megatonnes, a factory accident) and the largest designed munition was about 10 tonnes. So nobody actually knows what a megatonne of TNT looks like when it goes off. That doesn’t stop people using the unit.
As a geologist, I sometimes wonder if people will start talking about meteorite impacts in terms of micro-Chixulubs, of mega-Chelyabinsks. Off the top of my head (ie: I need to calculate this) the energy release at Chelyabinsk was a billionth of that at Chixulub, so 1 Chelyabinsk equals (approximately) a nano-Chixulub.

Magnitude is the energy released at the focal point. Intensity is the severity of the associated ground shaking.
An example : many years ago I was on an oil well where we needed to cut and retrieve several strings of casing (steel pipe). One string we severed about 9000ft below ground (sea) level with a 20kg dynamite charge, and we didn’t feel a thing on surface. Another string we had to sever 20ft below seabed (400ft below ground/sea level) with another 20kg charge. That one had a much higher ground motion intensity, for the same magnitude of explosion. (We actually had to use a 50kg charge to sever that casing, and that knocked my cup of coffee off my desk!)